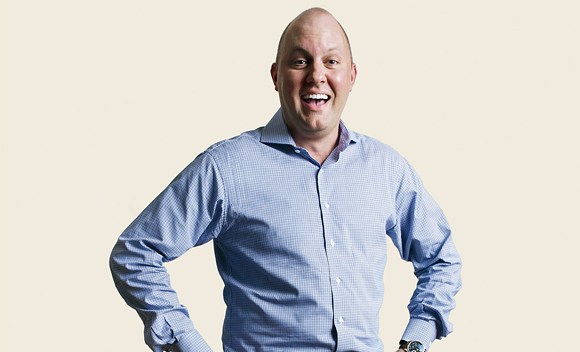 Hollywood is very unlike the Valley. Probably the biggest difference is in the valley if you say that somebody’s startup is just all a story and no substance, it’s very offensive things to say. In Hollywood, they take that as a huge compliment because the whole point is to tell a great story. The other main difference is, the people in Valley think their life is harder or it’s harder to start the companies or it’s hard to compete for the business. Hollywood is much more difficult. It’s actually more hardcore competitive, even compared to vicious business environment.

The way modern venture captial firms work is kind of strange and interesting. So, we inbound 2000 pitches per year from qualified referred entrepreneurs. So, lot of it about meeting and trying to survive the tsunami.

I have a little simulation of Peter Thiel. He lives on my shoulder right here. I argue with him all day long.

You want to kind of construct a model of how they think and be able to be very objective and fair — where you can think things through from their standpoint. Then you have your own view on things. Then you try to run through in your head what you know of them and say, OK, here are the conclusions that they would reach. If you put enough time into that, you start to be able to have these conversations with yourself. People might look at you funny while it’s happening, but you get to engage in this dialogue.

The three people in valley who I do that most often in Peter Thiel, Elon Musk and Larry Page. They are the most audacious people who have worked in Silicon Valley.

Venture captial is a funny business. There are two mistakes you can make in venture capital. The first one is mistake by commission where I make a decision, I invest in a company and I lose all my money. It’s the mistake most of people make and think about. The second is the mistake of omission which is Mark Zuckeberg walks in door at venture captial firm XYZ in 2004, this idea is ridiculous, friendster proved it couldn’t work, so he was told by a lot of people. In venture capital business, every highly successful VC has made mistakes of omission, really big ones, of companies that they had the chance to invest in, they should’ve invested in, they didn’t invest in.

The mistakes of commission they matter but they don’t scar you for life. They just fade in history.

The mistakes of omission, it’s asymmetric payoff. When these companies work, they get a extra thousand. If you lose, you lose 1x. If you win, you win 1000x or 10,000x.

Why do we make those mistakes of omission so often? It’s almost always because we have some theory for why something’s not going to work. You develop an idea, and then you look for all the evidence that supports it and ignore all the evidence that disproves it. You get locked into your ideas.

Just because MySpace didn’t reach Facebook levels of scale didn’t mean Facebook wouldn’t be able to. So you have to be ruthlessly open-minded and constantly willing to reexamine your assumptions.

If your approach to investing is 90% action, 10% thought, then you are like every other schmo in the stock market. As a VC you are going to blow yourself to bits.

The great VCs, great public market managers, great hedge fund managers, anybody with long term horizon, they seem to spend 90% of time thinking and arguing (convinicing their crazy idea will work to others).

Most of the good ideas are already kind of obvious. And by the way, they probably have been tried before and they probably failed, but the time is gonna come when they will work.

The view of venture philosophy is sort of forget whether or not it will work, ask the question about what if it did work and then push that question out as far as you can.

If you don’t start layering in HR once you’ve passed 50 people on your way to 150, something is going to go badly wrong.

One of the things you see crystal clearly in VC is how much competition emerges whenever anything works. Every single time we say, “Oh, this startup is unique. There’s some unique product here and there’s not going to be competition,” invariably six months later there are 20 venture-backed competitors doing the exact same thing. And so at some point, if the early guys don’t get to the other 95% of the market, somebody else is going to go take it away. And whoever has 95% of the market, number one they’re going to get all the value. All the investment returns, all the employee compensation flows to that company. And then number two, that company then accretes resources so they can work backward. In a lot of cases, they end up buying the company that got the early adopters for a small percentage of their equity, and then they just take the whole thing.

I’m really on the Jeff Bezos program on structure of teams, the two-pizza team thing. Jeff Bezos favors product innovation teams with five to seven people—no more than can be fed with two pizzas. I think hierarchies kill innovation for the most part. You need original thinking and speed of execution, and it’s really hard to get that in anything other than a small-team format, in my view.

If you can’t ride two elephants at the same time, what are you doing at the circus?

90% of scientist and engineers that have ever existed live right now.

Change in economy is happening all the time.

The goal isn’t to be perfect but rather to be a great success.

Taking ego out of ideas is a very hard thing to do.

If you don’t keep innovating – your product will go stale. And somebody will come out with a better product and displace you.

You have to be ruthlessly open-minded and constantly willing to reexamine your assumptions. You have to take the ego out of ideas, which is a very hard thing to do.

Capital is abundant but opportunties are scarce.

What you don’t do can hurt you more than what you actually do.

The most extreme mistakes in Berkshire’s history have been mistakes of omission. We saw it, but didn’t act on it. They’re huge mistakes — we’ve lost billions. And we keep doing it. We’re getting better at it. We never get over it. There are two types of mistakes: 1) doing nothing, what Warren calls “sucking my thumb” and 2) buying with an eyedropper things we should be buying a lot of. ~ Charlie Munger

There was a catastophic crash in 2000. It was an actually a bubble, the numbers are very clear on that. There was about 4 years of nuclear winter where very little happened then starting in 2004, tech started to work again. And between 2004 and today, it’s been constant commentary on bubble, bubble, new bubble, tech bubble 2.0.

In 2006, Yahoo! offered to buy Facebook for a billion dollars, and Accel Partners, Facebook’s lead investor, urged Mark Zuckerberg to accept. Andreessen said, “Every single person involved in Facebook wanted Mark to take the Yahoo! offer. The psychological pressure they put on this twenty-two-year-old was intense. Mark and I really bonded in that period, because I told him, ‘Don’t sell, don’t sell, don’t sell!’. He didn’t sell; Facebook is now worth two hundred and eighteen billion dollars.

Airbnb’s founder Brian Chesky describing what happened when they faced a PR debacle, “Marc came to our office at midnight and read the letter I’d written to our community about the Airbnb Guarantee, and the two changes he made changed the company forever. I’d said we guarantee five thousand dollars for property damage, and he added a zero, which seemed crazy. And he told me to add my personal email address. He gave us permission to be bold.”